Learning to read candlestick charts is a great starting point for any technical trader who wants to gain a deeper understanding of how to read forex charts in general. As you may already know, Candlestick charts were invented and developed in the 18th century. The earliest reference to a Candlestick chart being used in financial markets was found in Sakata, Japan, where a rice merchant named Munehisa Homma used something similar to a modern Candlestick patterns to trade in the Ojima rice market in the Osaka region.

Reading a Forex Chart with Candlesticks 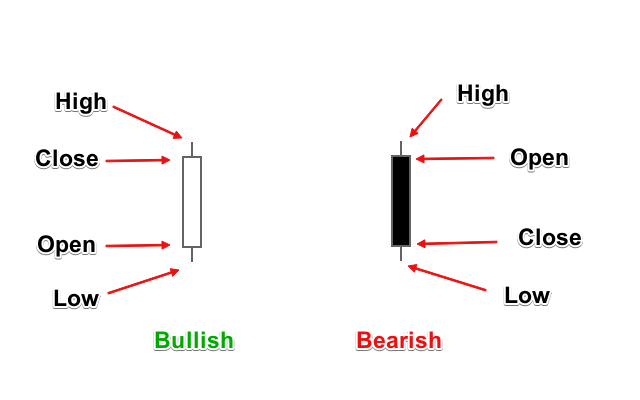 Before you can read a Candlestick chart, you must understand the basic structure of a single candle. Each Candlestick accounts for a specified time period; it could be 1 minute, 60 minute, Daily, Weekly exc.  Regardless of the time period, a Candlestick represents four distinct values on a chart.

Although the same four values are also found in Western-style bar charts, the bar chart uses horizontal lines on the sides of a vertical line to project the opening and closing prices. But, a series of Candlesticks on a chart can help traders identify the character of price action more definitively, which helps in the decision-making process.

However, while Candlestick charts make it much easier to interpret price action, it lacks the smoothness of the line chart, especially, when the market opens with a large gap. Hence, professional traders often end up using a short time period moving average to get the “feel” of a smooth trend, or lack of trend, in the market. So, it can be a good idea to add a moving average to the chart while using Candlestick charts.

Each Candlestick represents an Open, High, Low, and Close value. The location of the opening price, how high or low price reached during the candle session, and where the price closed at the end of the time period are all factors in understanding candlestick charts.

Over the years, Japanese traders had developed various Candlestick patterns based on historical price movements. Every trader should invest their time and learn these patterns as it will provide a deeper knowledge and understanding of reading forex charts in general. Candlestick patterns can help you interpret the price action of a market and make forecasts about the immediate directional movements of the asset price.

While there many different patterns, we will discuss some of the most popular Candlestick patterns that can help in reading a price chart like a professional trader.

A candlestick reading can provide us with information on the three market sentiments: bullishness, bearishness, and a neutral or tentative market condition.

Below are some candle formations that can help us gauge market sentiment: 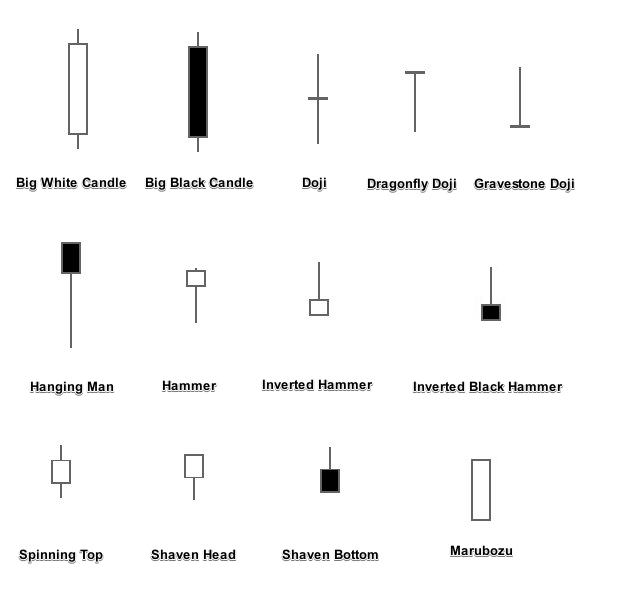 When you are reading a Candlestick price chart, one of the most important things to consider is the location of the Candlestick formation. For example, a Gravestone Doji appearing at the top of an uptrend can indicate a trend reversal. However, if the same pattern appeared during a longstanding downtrend, it may not necessarily mean bearish trend continuation.

We will further discuss the importance of location of Candlestick patterns in some example trades later.

In the next section we will discuss some complex candlestick patterns. Let’s take a look at the illustration below: Figure 3: Examples of Some of the More Complex Candlestick Patterns

Once again, remember that regardless of the complexity, the location of all these simple and complex Candlestick patterns is one the most vital aspects of reading forex charts while using Candlesticks.

By now, you should have a good idea about what a Candlestick is and how to read simple and complex Candlestick patterns. So, let us now try to read trading charts to see how we can trade using these patterns.

In this example in figure 4 of the GBPJPY daily chart, we can see that the GBPJPY price was bouncing around a strong support level but failed to break below it. On the third try, the GBPJPY did penetrate the support level, but the market swiftly reversed and formed an Engulfing Bullish Candlestick pattern that signaled further bullishness in the market.

At this point, some beginner traders may recognize the bullish setup and immediately enter a buy order. However, professional traders are not only waiting for Candlestick patterns to form around key pivot zones, like this support level in figure 4, but they will also wait for the proper confirmation to enter the trade.

The next day, the GBPJPY price penetrated above the high of this Engulfing Bullish Candlestick, which confirmed that there would be additional bullishness in the market over the next few days.

Professional traders wait for this confirmation because they understand the concept of order flow and self-fulfilling prophecy.

You see, most large banks and hedge funds also watch key market levels and price action around critical levels. Once the Engulfing Bullish Candlestick formed around this crucial support level, it prompted a significant number of pending buy orders just above the high of this Engulfing Bullish Candlestick. Once the price penetrated above the high, it triggered those orders, which added the additional bullish momentum in the market.

Hence, waiting for the price to penetrate above the Candlestick pattern can help you increase the odds of winning on the trade.

As you can see in figure 4, once the buy order confirmation came, it did trigger a large uptrend move over the next few days.

As we briefly discussed earlier, the location of the Engulfing Bullish Candlestick for this particular trade was the most important factor. First, it formed around a major pivot zone, where the GBPJPY Bears had failed to break the support area in the previous two attempts.

When you apply Candlestick patterns with additional technical confluence, it provides for a powerful combination of factors that can help increase your odds of winning. And this is exactly what professional traders try to do.

If the same Engulfing Bullish Candlestick pattern appeared at the top of a longstanding uptrend, it would have also signaled additional bullishness in the market, but that signal would be much less powerful. Since the market was already in an uptrend, it may not have had the legs to push the price much higher.

However, on this instance, the market was already trading in a range for several days. As you may know, when the market consolidates for a while, it is basically setting up to breakout in one direction or the other. The formation of this bullish Candlestick pattern provided a signal as to of which way the market was about to break.

If you knew how to read a simple Candlestick pattern like the Engulfing Bullish pattern, you could have entered this trade at the right time and earned a handsome profit with this high reward to risk ratio setup.

It is strongly recommended that beginning traders stick to using Engulfing Bearish or Bullish patterns to confirm a trend reversal, as those tend to be higher probability trades. However, this particular example in figure 5 demonstrates that if you know how to use the confluence of support and resistance levels along with Candlestick patterns, these can be used to trigger trend continuation signals as well.

In the second trade, the Three White Soldiers Candlestick pattern emerged near the bottom of this downtrend. At this point, professional traders for preparing for the market to reverse the prevailing downtrend. The prudent course of action would be to wait for the market to confirm this signal, which means that unless the price broke above the high of this Three White Soldiers Candlestick pattern, you would not have entered the trade.

Candlestick chart reading is largely based on the principle of technical analysis, which assumes that regardless of the underlying fundamental or economic conditions, the current market price reflects “all known information” regarding the asset.

Hence, the reason why an asset is moving in a certain direction is often not necessarily important to technical traders. Instead, they are more interested in interpreting what the price action is doing at the current moment and how they can take advantage of that. Furthermore, technicians know that the underlying reasons for market fluctuations over time can be many, and often the market does not always act “rational.”

Candlestick chart reading can be most useful during these volatile periods of irrational market behavior.

Traders can apply overbought and oversold technical indicators like Stochastics or Relative Strength Index (RSI) to find out when such irrational market conditions may be present.

For example, by using oscillating technical indicators, a trader will first wait for a signal that the market has moved into an overbought or oversold condition. At that point, they would look for a reversal signal of the prevailing trend. Many times, this reversal signal will come in the form of a candlestick formation.

Formation of a simple or complex Candlestick pattern during such market condition confirms and verifies the impending contrarian price action for the trader. Placing their order in the market using this combination of technical factors can significantly improve the accuracy of their trades.

Once you learn how to correctly read Candlestick patterns and combine this skill as part of a broader trading strategy, then you will likely improve the consistency of your market entries and your overall performance as a trader.

Once you master the basics of Candlestick chart reading, it can help you integrate this unique knowledge into your existing trading strategy and lead to better accuracy and improve your trading performance in the long run.