Chart patterns are an integral part of the technical trader’s arsenal. Their effectiveness has been studied and validated. One reason why many traders find chart trading attractive is because these patterns can offer precise entry and exit points based on the rules of each pattern.

These patterns typically appear after a trend move. After the confirmation of the pattern, you expect the trend to be reversed. Let’s now dissect the structure of each of the two patterns:

The Double Top technical formation starts with a bullish trend. The trend gets interrupted at some point and the price of the currency pair starts to range. The range consists of two swing tops on the chart.  After the creation of the second top, the price action drops and starts a new bearish trend.

The diagram below will help you visualize this process: Above you see the structure of the Double Top chart pattern. Notice that the initial trend is bullish but later it gets reversed after the Double Top formation. As mentioned, this is pretty much the same situation as the Double Top, but this time the price action starts with a bearish trend, which gets reversed into a fresh bullish move.

Confirmation of Double Tops and Bottoms

Although the pattern is fairly easy to recognize and can be traded using a basic set of rules, you cannot simply jump into a trade whenever you see two bottoms or tops on the chart. To initiate a trade based on this pattern, you should first confirm its validity. There are two details related to the confirmation of the Double Top and the Double Bottom reversal patterns. This includes the Neck Line and the breakout.

The Neck Line of the Double Top pattern is the horizontal level at the bottom between the two tops.

Opposite to this, the Neck line of the Double Bottom pattern is the horizontal level at the top between the two bottoms. This is how the neck line looks: The first thing you need to do when you spot the pattern is to manually add the Neck Line on the chart. It plays the role of a trigger for your trade. Therefore, this level is of a great importance for your pattern.

The confirmation of the pattern comes when the price action breaks the Neck Line. Closing a candle beyond the Neck Line means that there is a valid breakout of the range, which comes after the initial trend. Since the breakout is opposite to the trend, we confirm the emergence of a new trend.

Potential of the Double Top and Bottom Reversal Patterns

As we already said, the Double Top and the Double Bottom have a reversal character. In this manner, they are expected to change the direction of the trend, creating a brand-new tendency.

In addition, when you spot the Double Top or Bottom reversal pattern, you can use the structure to extrapolate how far the potential price move could go.

There are two things you need to do in order to identify the minimum potential of your Double Top/Bottom chart pattern. We will discuss this in the next section.

Size of the Double Top and Double Bottom Reversal Patterns 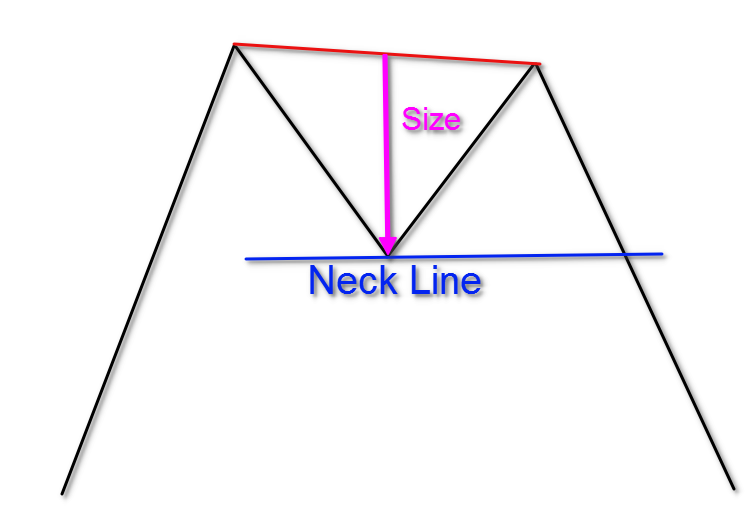 The size of the Double Top pattern is illustrated with the magenta colored arrow on the image above. It works the same way with the Double Bottom pattern, but in reverse. Again, the same is in force for the Double Bottom figure, but in a bullish direction.

The 11 Step Process for Trading Double Tops and Bottoms

To trade Double Tops and Bottoms properly, you need to implement some basic trading rules. The following steps will help you identify and trade the Double Top reversal:

The first thing you need in order to identify a Double Top pattern is a bullish trend. You cannot confirm the pattern in the absence of a trend. Although Tops and Bottoms can and do occur when the market is not trending, a valid Double Top/Bottom formation must exist in the context of a trend.

Step 2: Creation of a Top

Each top within a bullish trend could be the beginning of a Double Top pattern. Therefore, you should carefully observe the price action at swing highs on the chart.

To continue with your analysis, you need to see the price action interrupting its current trend. Typically, this would come in the form of a price retracement that breaks the bullish trendline. It is important to note that this (Step 3) may sometimes come at a later point in the sequence of events.

Step 4: Creation of a Bottom

After the top is created on the chart, the pattern needs to create a bottom. Many times, this bottom could be located on a bullish trend line, but that is not a requirement.

Step 5: Creation of the Second Top

After a bottom has formed, the price action needs to create a second top on the chart. This is often referred to as the retest. The perfect Double Top pattern will have a second top, which is slightly lower than the first top. This indicates that the trend is at least slowing down and likely exhausted.

The sixth step of our trade identification process is to plot the actual neck line of the pattern. To do this you need to reference the swing bottom, which is located between the two tops. Then you would draw a horizontal line at this level. This would be the Double Top Neck Line.

Since you have a confirmed Double Top pattern on the chart, you now have the go ahead signal to enter a position. For the Double Top, you would open a short (bearish) trade.

You should always secure your open trades with a stop loss order. Although the success rate of these patterns is relatively high, there is never a guarantee that the trade will work in your favor.

The optimal place to put your stop loss order is just above the second top of the Double Top reversal pattern.

Step 10: Size of the Pattern

Now that you are short based on the Double Top pattern, you need to project a possible target. You should measure the size of the pattern as discussed earlier and then apply it downwards starting from the Neck Line. This would be your minimum target.

You should exit your trade when the price action reaches the minimum target of the Double Top chart pattern per Step 10.

This 11-step process works absolutely the same way with the Double Bottom reversal. However, the rules are applied in the opposite direction.

Now that we have discussed the steps for trading the Double Top, we will shift our attention to an actual price chart which has a Double Top formation. Have a look at the following example: This is the four-hour chart of the EUR/USD currency pair. The image covers the period during August 2016 and shows each of the 11 steps designated with different colors, which will help you connect them to the respective events on the chart.

Step 1: We have the yellow bullish trend on the chart.
Step 2: The price creates the first top.
Step 4: Notice that the next bottom created is on the trend line and not through the trend line. Therefore, the trend is not broken yet and Step 4 appears right after Step 2. Step 3 comes at a later point.
Step 5: The price creates another top, which is slightly lower than the first top on the chart.
Step 3: The price action finally breaks the trend line, which puts Step 3 right after Step 5.
Step 6: We plot the neck line on the bottom between the two tops of the pattern.
Step 7: The price action breaks the blue neck line of the Double Top reversal pattern.
Step 8: Sell the EUR/USD when you identify the breakout and candle close beyond the neck line.
Step 9: Put a stop loss order right above the second top of the pattern.
Step 10: Then you measure and apply the size of the pattern as your minimum target.
Step 11: You close the trade when the price action reaches the minimum target.

Notice that after the break through the Neck line, the price action creates a big bullish correction as a result of high volatility. A bearish candle with a very big upper candlewick is created and it nearly hits our stop. However, our stop loss order is well positioned and it sustains the pressure. 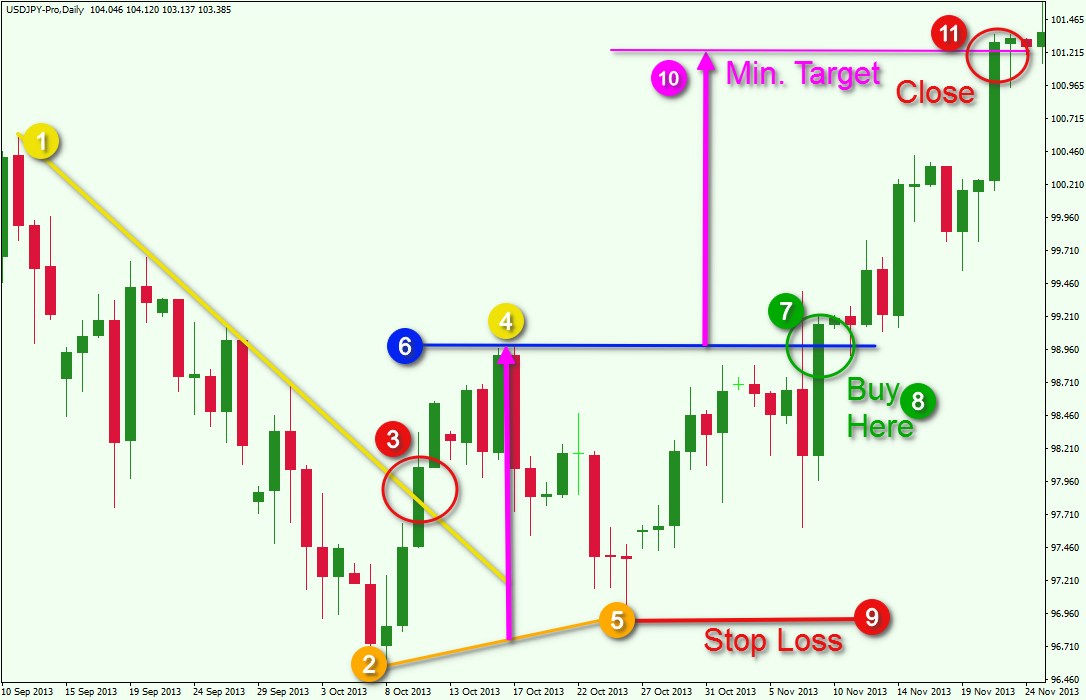 You are now looking at the daily chart of the USD/JPY for Sep – Nov, 2013. The image illustrates the 11 step process you need to follow to trade this Double Bottom. Let’s evaluate each one: