In addition to its derivative markets, the forex market is composed of three primary segments: the Interbank market, the retail market and the exchange traded futures market. Each of these segments in turn has a number of market participant types that primarily use that segment to execute currency transactions.

The following sections will describe each currency market segment and the nature of its primary participants. We will mention some specific traders and financial institutions that have created a name for themselves within each particular market segment.

The over the counter or OTC Interbank forex market consists of a loose and largely unregulated group of financial institutions that deal currencies among themselves and make exchange rate quotations to clients. In the Interbank market, the term “market maker” commonly refers both to the large financial institution that makes prices to others, as well as to the individual who works at such an institution and who is personally responsible for making such quotes.

The larger among these financial institutions typically act as market makers who provide forex rate quotes to each other, Interbank brokers and clients. In contrast, the smaller financial institutions, corporations, fund managers and high net worth individuals who participate in the Interbank market tend to act as clients to the large market makers.

Although electronic forex dealing services and markets are available, they are largely used among the market makers themselves, while Interbank forex brokers primarily negotiate deals between market makers verbally via telephones and call boxes.

Most clients of these large financial institutions will get forex quotes from the market makers by making a telephone call to the customer dealing desk of the large financial institution that the market maker works at. The customer service person then verbally requests a quotation from the market marker in the relevant currency pair working on the trading desk.  Forex transactions are generally done using credit lines that counterparties extend to each other, rather than on a margin basis.

The list below gives some additional details about the main foreign exchange market participants operating in the Interbank forex market:

The biggest currency market traders operating in the Interbank forex market tend to work at major commercial and investment banks. They collectively provide considerable liquidity to the currency market by providing bid ask prices to clients, as well as speculating for their banks’ proprietary trading accounts.

Some of the largest names among these big institutional forex market players include: Deutche Bank, UBS, Citigroup, Bank of America, Goldman Sachs and HSBC.

Due to its massive size, impressive liquidity and relative stability, the forex market has attracted a number of high net worth individual traders, proprietary bank traders, and hedge fund operators who have made a collective mint trading currencies speculatively.

Some of the better known among these currency trading giants include:

Each foreign exchange trader mentioned above comes from a different educational background, although many of them worked for George Soros, who really seems to know what makes a currency player successful and appears to have the rare ability to communicate it to the brightest traders who work for him.

The retail forex market is primarily made up of individual speculators that trade on margin deposited in a trading account with an online forex broker using an electronic trading platform like MetaTrader, for example. In addition to individual traders, retail market participants also include tourists, travelers and students that travel or study outside of the country of origin.

The great majority of retail forex participants typically trade currencies online through one of many online forex brokers and Introducing brokers. These retail forex market participants typically trade in small amounts that can range from micro to standard lot sizes, with the standard lot size usually consisting of 100,000 units of the base currency in a currency pair.

A large percentage of the retail forex market is made up of individual speculators that take on relatively small positions in their online forex broker margin accounts. Nevertheless, while the retail forex market has grown exponentially with the advent of online trading, it still only represents a small fraction of total forex trading volume.

Below are listed the major players in the retail forex market:

Retail forex traders tend to operate in small transaction amounts relative to those dealt in the Interbank market. The major forex players operating in the retail forex market tend to be the online forex brokers that cater to such clients. The following table shows the largest retail forex brokers by trading volume in billions of U.S. Dollars that was measured for each broker over a month and a half period starting on July 1st of 2016. 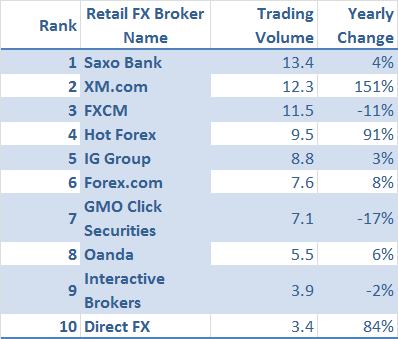 These trading volume numbers are displayed graphically in the bar chart shown below in Figure #1 along the vertical axis in billions of U.S. Dollars per trading day.

Futures contracts on currencies have been available for trading since the late 1970s through the International Monetary Market or IMM of the Chicago Mercantile Exchange. In addition to exchange traded futures on currencies, the exchange offers other derivatives like options on the futures contracts. Electronic trading on both futures and options can take place when the live exchange market in Chicago is closed. The major participants in the forex futures market include:

By far, the main players in the forex futures market are made up of large commercial banks, hedge funds and the central banks of the countries where the currency originates.

Arbitrageurs play an important role in keeping the spot forex and currency futures market consistent with each other and can often deal in very large transaction sizes.

When discrepancies arise in the currency market between the Interbank spot market and the currency futures market, whether as a result of economic data releases that differ substantially from market expectations or unanticipated geopolitical events, an arbitrage may exist between those markets that some savvy traders watch for and quickly bring back into line.

When doing such arbitrages to perfectly square off a spot transaction with a futures contract, a forex swap from spot out to the futures delivery date will also need to be executed in the same currency amount.

Furthermore, when a nation’s currency is showing extreme fluctuations — or strong directional behavior that results in new highs or lows — that country’s central bank will often become active in the forex market to help calm volatile markets and dampen trends.  Their activity might include participating in the futures market, as well as the spot market, with the objective of reestablishing stability and an orderly market in situations where forex market volatility has reached extreme levels.