Currency traders observing exchange rate movements in a currency pair that involves the U.S. Dollar often ask themselves whether price fluctuations are due to a revaluation of the foreign currency or to a general shift in the value of the Dollar.

To make this question easier for traders to answer, exchanges and the Federal Reserve Bank have come up with two indices that reflect the value of the U.S. Dollar compared to a basket of other currencies. In both cases, these baskets are made up of many of the major trading partners of the United States.

The following sections will focus largely on the narrower U.S. Dollar Index traded on exchanges under the symbol USDX or DXY in the United States. Nevertheless, the Fed’s broader “Trade Weighted U.S. Dollar Index” will also be mentioned since the central bank uses it to assess how the Dollar’s value is faring versus the currencies of the United States’ major trade partners.

The following table ranks the top 26 trade partners of the United States in terms of the total amount of trade between the two counties in U.S. Dollars according to data compiled by the U.S. Census Bureau in 2011.

Note that some of the countries mentioned — such as Germany, the United Kingdom, France, The Netherlands, Belgium and Italy — are also part of the larger European Union trade bloc that ranks first in this list.

The total amount of trade between the United States and the rest of the world appears in U.S. Dollars at the top of the table for comparison purposes. Table 1: A table listing the primary trading partners of the United States.

The rest of the countries ranked lower than Chile are grouped together under a “Remaining Countries” entry highlighted in blue, while the total trade is listed under the “World” entry at the top of the table.

What is the US Dollar Index?

The U.S. Dollar Index is the most widely known currency index and trades on exchanges under either the USDX ticker or the DXY ticker. This important measure of the U.S. Dollar’s relative value has been around since 1973 when it initially started out with a value of 100,000.00.

The U.S. Dollar Index became a very useful yardstick for the Greenback after the Bretton Woods system of fixed exchange rates started to collapse once the Nixon Shock of August 1971 unilaterally ended the U.S. Dollar’s convertibility into gold.

The basket used to compute the value of the U.S. Dollar Index has been changed only once after the Euro replaced several other European currencies at the beginning of 1999.

The USDX futures contract currently trades on the Intercontinental Exchange or ICE. It has become a major benchmark for the value of the U.S. Dollar internationally and in the financial media.

Component Currencies within the USDX Index

The following table lists the basket of the six component currencies that presently make up the U.S. Dollar index and their respective percentage weightings:

Table 2: A table listing the six current components of the U.S. Dollar Index and their respective weightings.

How to Compute the USDX US Dollar Index

As mentioned above, the U.S. Dollar Index is a weighted geometric mean.  The weighted mean of a group of numbers X with a corresponding group of weights W as follows:

and it is computed mathematically using the following equation:

In practice, traders can use a spreadsheet type program, such as Microsoft Excel, to compute the theoretical value of the U.S. Dollar index from the exchange rates of its component currencies and their weightings.  The overall spreadsheet equation would look as follows:

Within a spreadsheet, this calculation can also be broken down by entering in each of the component exchange rates, computing the weighted rates separately, and then multiplying the leading 50.14348112 factor by each of the individual Weighted Rates. For example, this might look as follows: Table 3: A spreadsheet table listing the six current components of the U.S. Dollar Index, their exchange rates versus the U.S. Dollar, their respective weightings, and the resulting theoretical USDX value computed from them.

As the spreadsheet above shows, the USDX’s theoretical value given the list of exchange rates shown in the table would be 96.63935446. This compares closely with the observed USDX U.S. Dollar index value of 96.65 as priced by market makers on the Intercontinental Exchange or ICE.

Another important U.S. Dollar index is the Trade Weighted U.S. Dollar Index or TWDI that has been computed, published and watched by the U.S. Federal Reserve Bank since 1998. This index presents a much broader assessment of the U.S. Dollar’s value compared to a basket of 26 currencies and allows the Fed’s monetary policymakers to assess how competitive U.S. made goods are relative to goods produced by other nations.

Due to its more comprehensive nature, many economists think that the Fed’s TWDI is the primary index of the dollar’s value that ultimately has the most impact on the U.S. economy. Furthermore, this broader trade-weighted dollar index is used by the Federal Reserve policymakers to adjust U.S. monetary policy depending on the strength or weakness of the U.S. currency, and hence it has a greater potential effect on benchmark interest rates in the United States than the much narrower USDX.

Component Currencies within the Fed’s TWDI

The following table lists the basket of the 26 component currencies that presently make up the Fed’s broad index of the foreign exchange value of the dollar, in addition to their respective percentage weightings:

Table 4: A table listing the 26 current countries that currencies are components of the Fed’s broad based TWDI or trade weighted U.S. Dollar index and their respective weightings in 2016.

In the above table, note that an asterisk after the Country or Region name indicates that its currency is part of the Fed’s Major Currencies Index. Those rows without an asterisk indicate that the corresponding country has its currency in the Fed’s Other Important Trading Partners or OITP index.

A US Dollar Index Historical Chart

The USDX future contract trades actively on the ICE futures exchange, so a historical dollar index chart of its value is readily available for technical analysts to use when determining the future direction of this index’s value.  Many online charting websites provide an interactive service that forex traders and inter-market analysts can use to quickly pull up a USDX chart for numerous time frames.

Furthermore, the following chart shows graphically how the value of the $DXY U.S. Dollar index has shifted since 1992. 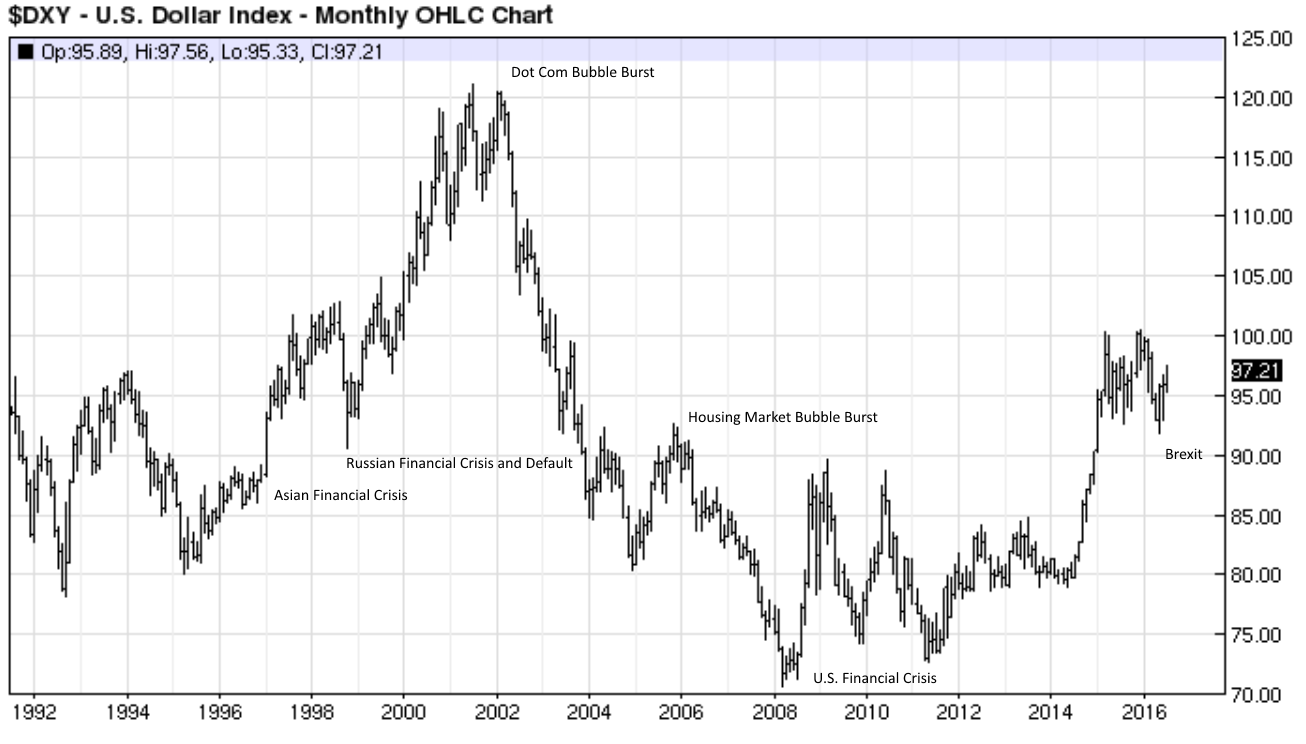 Interpreting the US Dollar Currency Index

The value of the USDX U.S. Dollar Index can give a trader or analyst an idea of how much the U.S. Dollar has risen or fallen relative to the starting point of the index back in 1973.

For example, if the index currently has a value of 96.65, then that indicates the Greenback has fallen by 3.35 percent compared to the basket of six currencies since 1973.  Similarly, if the U.S. Dollar Index is trading at 115, then that would mean the U.S. Dollar has appreciated by 15 percent relative to the USDX basket since the inception of the index.

U.S. Dollar Index futures based on a weighted basket of the Euro, Japanese Yen, British Pound Sterling, Canadian Dollar, Swedish Krona and Swiss Franc are readily available to traders and hedgers who are able to execute transactions on the ICE or Intercontinental Exchange.  U.S. Dollar Index futures deal under the USDX ticker and are available for deal execution and order entry 21 hours each trading day on that exchange’s electronic dealing platform.

The ICE offers electronic trading hours of 8:00pm Eastern Time until 5:00pm the next day during the period from 6:00 pm Eastern Time on Sundays to Fridays at 5:00 pm.  The ICE trading platform becomes available thirty minutes prior to the market open so that traders can enter orders.

The USDX futures expire in four months each year following the quarterly cycle of March, June, September and December expirations dates.  The last trading day of each contract two days before settlement and trading closes at 10:16 Eastern time.

The USDX contracts are physically settled on the third Wednesday of each quarterly expiration month against the six component currencies in each currency’s respective percentage index weight. USDX futures contracts settle at the daily settlement value determined by computing the volume-weighted average of all of the electronic trades dealt in the closing session from 14:59 to 15:00 Eastern time. Settlement rates can be quoted out to three decimal places.

For those traders that like to deal in options, the ICE also offers U.S. Dollar Index options for delivery on the same quarterly dates as the futures contracts. The last trading day for these options is two Fridays earlier than the third Wednesday of the month that the contract expires.

The USDX can also be traded via some online forex brokers who offer Contracts for Difference or CFDs on this USD dollar index financial instrument. As the name implies, these CFD instruments are generally cash settled.

These CFDs are derivatives that typically have their prices determined by the value of the underlying USDX futures contract traded on the Intercontinental Exchange.

Each broker tends to have their own terms for USDX CFDs, so be sure to check that their contract parameters and settlement method will suit your trading needs.

Traders can use movements observed in a US currency index like the USDX to give them a sense of how the U.S. Dollar is changing in value relative to the component currencies in the index.   For example, if the USDX is rising, then so probably is the U.S. Dollar.   Conversely, if the USDX is falling, then the Greenback is probably also declining in value in the foreign exchange market.

Many financial media outlets report on changes in the U.S. Dollar Index’s value to give their audience a sense of how the U.S. Dollar performed in the forex market as an alternative to noting how individual currencies rose or fell versus the Dollar.

The USDX can also be used as an inverse indicator of the strength of the European Union’s consolidated Euro currency, since the Euro is weighted at an overwhelming 57.6 percent in the index. The next largest currency weighting in the index is that of the Japanese Yen at only 13.6 percent.

Another key thing for forex traders to remember is how movements in the U.S. Dollar Index relate to movements in the component currencies quoted versus the U.S. Dollar. For example, if a component currency pair is quoted like USD/JPY, with the USD before the slash and the foreign currency after the slash, then the USDX and that currency pair should be positively correlated and they should both rise at the same time and fall at the same time.

In contrast, when a component currency pair is quoted like EUR/USD, with the foreign currency before the slash and the USD after it, then the USDX and that currency pair are inversely correlated. This means they should move in opposing directions, with one rising as the other falls.